It’s a city that never complained of water shortage. Turn the pages of history, and you will know that Bengaluru had an enviable number of water bodies – both lakes and tanks. Over a 100 lakes were built and developed by the founder of Bengaluru, Kempe Gowda, and his successors in the 16th century. Later the Wodeyars of Mysore and the British took forward the development of lakes. Bengaluru Urban and Bengaluru Rural districts had over 1545 lakes and 2000 watering holes for domestic animals and other smaller waterbodies. The total spread of these water bodies was over 3000 acres.

But with passage of time the numbers of lakes have dwindled. Many of these are excessively polluted and are on the verge of becoming acidic and unusable. Though the city’s water needs are met by the Cauvery River supply, lakes form an integral part of our biodiversity. Most of the lakes have vanished due to encroachment and construction activity for urban infrastructure expansion. The city once had 280-285 lakes of which 7 cannot be traced, 7 are reduced to small pools of water, 18 have been impinged by slums and private parties, 14 have dried up and are leased out by the Government. 28 lakes have been used by the Bangalore Development Authority to build extensions for residential areas. The remaining meagre number of lakes is in fairly advanced state of deterioration. 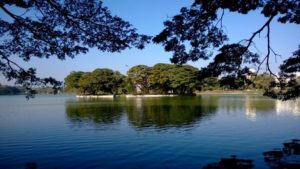 The estimated population of Bangalore by the year 2020 would be around 120 lakhs (16 million) and it demands a very hands-on regulation, planning and execution system in place, to face the challenges of water scarcity and to keep the city habitable. It is crucial to act now and save our lakes or a time will come where the damage can’t be undone.

In a bid to save these ecosystems, Namma Bengaluru Foundation initiated the Kere Habba which means “lake festival”, a celebration of our city’s lakes in all their forms, vanished or revived and to restore and retain the lakes in all their past glory.

Kere Habba was born out of an idea to save, protect and help our lakes survive through community involvement. Every edition of Kere Habba is an amalgamation of activities in and around a particular lake.

The reason to organise a Kere Habba is to educate people about the importance of lakes and how as a community we could contribute to the survival of lakes.

A spirit of active and involved community living is what we are trying to instill through this initiative. The event brings together everyone from the neighbourhood and volunteers from other areas to celebrate the lake through activities from bird watching, yoga, cycling, painting competitions, folk music, talks on lake conservation and biodiversity. Popular dance forms like Dollukunitha, Veeragase can also be enjoyed.

It’s taken years of hard work by the rulers of this historic city, to build and develop these small water bodies. It’s our turn now to protect and conserve these lakes for a greener and better future.

Your ticket for the: Makkala Kere Habba