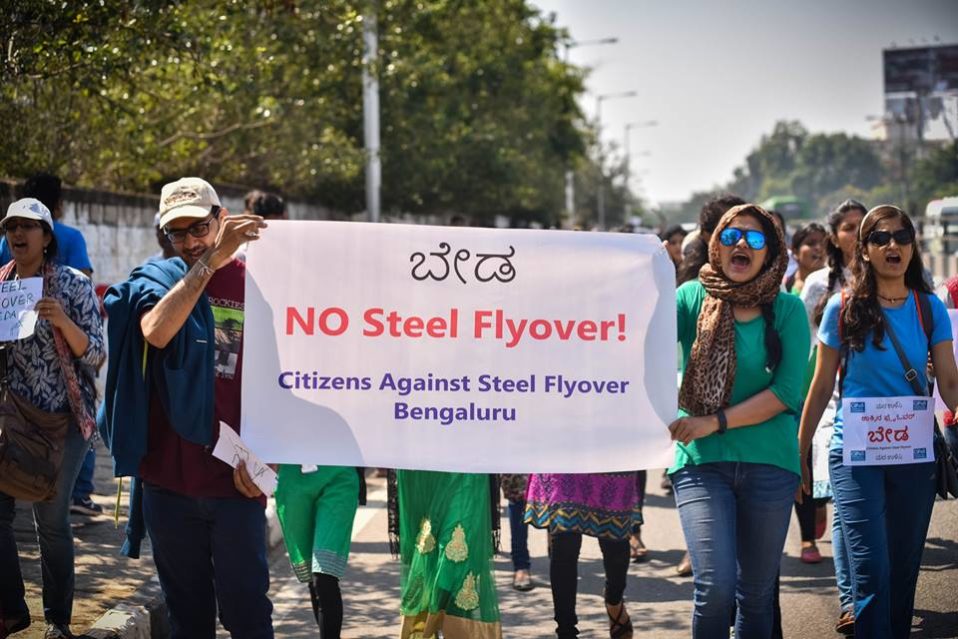 In March 2014, when Government of Karnataka announced the 6.72 km steel flyover from Chalukya Circle to Hebbal Flyover, little did they know that this ad-hoc project would galvanize citizen activism like never before. Unable to withstand the Government’s adamant, misleading, opportunist and reckless attitude, over 8000 Bengalureans came out on an early Sunday morning to form a human chain to send a simple, yet strong message i.e. #SteelFlyoverBeda.

A year on, Namma Bengaluru Foundation celebrates the power of collective citizenship that was rekindled in the minds of Bengalureans on October 16, 2016 effectively. The #IDaredToSayBeda campaign is an initiative to thank all those citizens who participated in the human chain as well as continued giving their support to the steel flyover beda citizens’ movement.

This citizen-led revolution, which eventually saved 2244 trees, was also a reminder to the Government that it needs to:

1. Find a place for citizen participation in matters related to Bengaluru’s development.

2. Have a statutory multi-year development plan that covers all aspects of the city’s development including sustainability.

3. Be held accountable for all Public Money, Assets and Contracts.

We would, once again, like to thank all those who unanimously said ‘Beda’ and for making fellow Bengalureans more aware of the fact that the longer they are silent, the more they are exploited.  The #IDaredToSayBeda sentiment that resonated in citizens a year ago  is what we need more of if we are to protect and Reclaim Bengaluru.

Your ticket for the: Steel Flyover: #IDaredToSayBeda