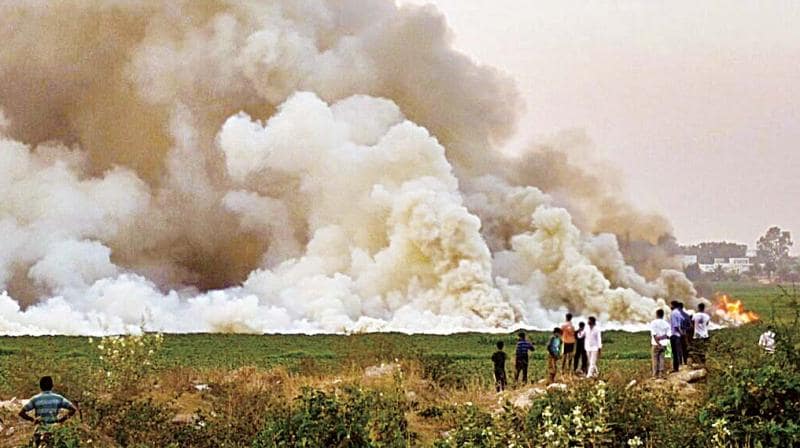 In February 2017, the infamous Bellandur Lake caught fire once again enraging the public on government’s inaction in rejuvenating Bengaluru’s largest water body. Taking note of this, Namma Bengaluru Foundation on February 22, 2017 impleaded into the Bellandur Lake fire case being heard at the National Green Tribunal (NGT).

In the intervention submitted by NBF, it brought to the NGT’s notice that:

•      The fire was not the first or only incident that the lake had caught fire, there has been numerous incidents of major or minor fire due to burning of solid municipal waste, garbage in the lake catchment. The fire department has been regularly dousing the fire near the lake bed. These incidents of garbage burning & fire has largely affected the air quality of the region, however, the authorities appear to have turned a blind eye towards the environment.

•      The present situation of the lake is alarming and immediate remedial measures are required to be adopted to save the dying lake in terms of the recommendations of the NBF’s #SaveBellandur Action Plan Report and GoK’s Expert’s Committee Report.

•      There is no proper quantification of actual amount of treated or untreated sewage entering the Lake. All estimates are based on old data.

January 29, 2018: Continuing its hearing into the #BellandurLake fire case, the National Green Tribunal passed interim directions based on the State’s Action Plan submitted before the Hon’ble Tribunal on January 29.

The directions passed are as follows:

1) KSPCB ordered to issue directions to all 99 apartment complexes, which are discharging sewage in the Bellandur and Varthur lakes, to establish modular Sewage Treatment Plants (STPs) within the available space without posing threat to the structural safety.

2) State authorities directed to maintain strict vigilance with regards to industrial pollutants/effluents entering into all the three – Bellandur, Agara and Varthur lakes.

3) Macrophytes (dry floating grass/hyacinth) stated to be the reason of lake fire has been directed to be physically removed and a compliance report must be placed every month in this respect.

4) IISc Bangalore asked to carry out study of lifecycle of Macrophytes and its biological removal/eradication, desedimentation.

August 17, 2017: A day after Namma Bengaluru Foundation submitted a memo to the NGT with pictures of the frothing Bellandur Lake following Tuesday (August 15) morning’s heavy downpour, the Government of #Karnataka in its response has blamed a ‘cloud burst’ for this week’s ‘unforeseeable’ situation. The Tribunal, which took note of the wide reportage of the city’s current scenario, lambasted the Government saying ‘no cloud burst would give rise to froth and smoke’ and issued four questions to the State, to be answered by August 22, 2017.

1) How many rajakaluves have you cleared?
2) How much waste have you collected from rajakaluves and particularly the Lake?
3) Where have you dumped it?
4) What are the preventive steps you have taken?

The answers submitted by the State will be verified by a Court Commissioner to be appointed by the Tribunal. Further, the NGT directed the Additional Chief Secretary, Urban Development Department, and the CEO, Lake Development Authority to be present for the next hearing scheduled on August 22, 2017. (Read more)

August 8, 2017: Coming to the rescue of the dying Bellandur Lake, the Hon’ble Supreme Court stayed the Karnataka High Court’s order dated June 15, 2017 – suspending the suo moto proceedings initiated by the National Green Tribunal (NGT) against incidents of fire reported in Bengaluru’s largest lake. This intervention essentially grants permission to the NGT to continue proceedings in the matter, with the hope that not just Bellandur but other lakes of the city are protected. The Karnataka HC order had said that the principal bench of the NGT at New Delhi did not have jurisdiction in the case, and the Chennai or the southern bench of the NGT should hear the matter. The HC was hearing a petition filed by Shashi Distilleries, one of the businesses told to shut shop by the Karnataka State Pollution Control Board on the directions of the green tribunal. (Read more)

May 18, 2017: The National Green Tribunal advised the state to “not waste time on making 100-200 page reports, instead work” towards saving Bellandur Lake. The Tribunal also directed the Joint Investigation Team – KSPCB, BDA and BWSSB – to ask all industries in the lake vicinity to install ETPs. If they do not comply within reasonable time, the NGT has instructed the JIT to disconnect their electricity and water supply and seal the polluting industries. The Tribunal also directed the JIT to give apartments and residential complexes around Bellandur Lake reasonable time to install STPs, failing which their water and electricity supply will be disconnected. (Read more)

April 19, 2017: In a landmark moment for Bengaluru, the National Green Tribunal (NGT) ordered a set of strong interim directions for the dying Bellandur Lake. Taking strong exception to the BBMP circular and UDD letter on Bellandur lake, the NGT instructed the two civic bodies to tender an unconditional apology and withdraw the same with immediate effect. Coming to the dying lake’s rescue, the NGT also ordered a set of strong interim directions, including shutting down of all industries in the lake vicinity. (Read more)

View: Snapshot of NGT’s interim directions to save Bellandur Lake

March 20, 2017: The NGT asked the two builders – Mantri Technzone Pvt Ltd and Coremind Software and Services Pvt Ltd to file a compliance report in terms of the directions passed in the judgement on 04 May 2016. NGT also refused to move the case to Karnataka High Court as impleaded by Mr. Kupendra Reddy and directed him refile his application.

Earlier, NGT issued a suo-moto show cause notice to various state authorities such as KSPCB, KLCDA, BDA, BWSSB and CPCB as to why they should not be prosecuted under the Environment Protection Act. The state authorities who have not filed their affidavits have been granted two weeks’ time for filing.

In the May 4th, 2016 judgment, to reclaim area of the lake to the extent of 3 acres 10 guntas in survey no. 43 should be restored to its original condition at the cost of Mantri Techzone Pvt Ltd. The possession of this area should be restored by them to the concerned authorities immediately. In addition, a buffer zone of 75 mts should be provided between the lake and the project area and this should be maintained as green area:

•      The Lake Development authority was directed to demolish all constructions including boundary walls falling in the buffer zone in respect of all water bodies/lakes of Bangalore.

•      The Tribunal had also directed that all Sewage Treatment Plants whether Government or privately owned, should meet the revised standards notified by Central Pollution Control Board (CPCB)/Ministry of Environment and Forests (MoEF).

•      BWSSB was directed to separately consider the water requirements during construction and operation phases.

•      It was mandated that only treated sewage water can be used for construction purposes and this condition was directed to be included in the Environmental Clearance (EC).

•      The Hon’ble Tribunal had directed the project proponents to remove the debris or construction material dumped into the Rajakaluves or on their banks and on the buffer zone of wetlands within four weeks.

Your ticket for the: The Bellandur Lake fire case