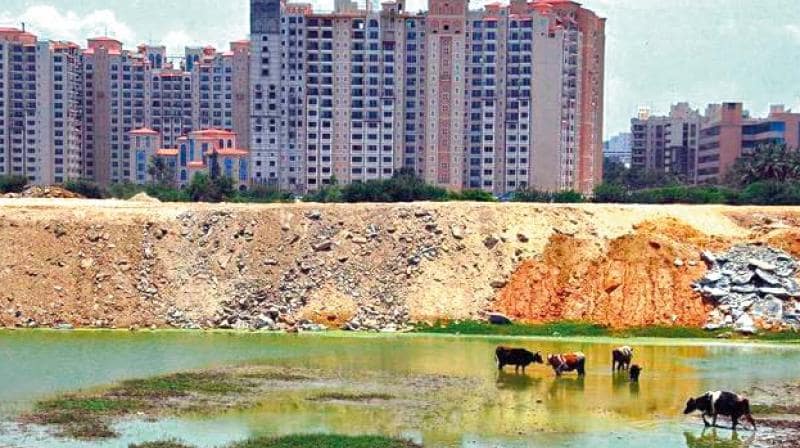 For over a decade now, innumerable developers have encroached Bengaluru’s lake beds and other ecologically sensitive eco-systems resulting in increasing number of dying water bodies. The builders also blatantly flout all rules related to the real estate sector. To reclaim our city from the hands of such erring builders is one of the main missions of Namma Bengaluru Foundation.

In light of the above, NBF, supported by Founder Trustee MP Rajeev Chandrasekhar, Forward Foundation, Bangalore Environment Trust and Praja Raag filed a writ petition against the various illegalities in the execution of a large mixed -used project coming up the ecologically sensitive area between Agara and Bellandur in the National Green Tribunal (New Delhi).

Hearing the case on May 4, 2016, in a landmark judgement the Principal bench of the NGT set a higher threshold of buffer zone around the lakes, increasing it from the existing 30 meters to 75 meters. Further, the NGT directed the buffer zone of the rajakaluves to be calculated from the edge of the drain as opposed to the current norm of measuring from the center of the drain. The project proponents – Mantri Tech Zone Pvt. Ltd. & Coremind Software and Services Pvt. Ltd. – have also been fined Rs 117 crore and Rs 13.5 crore respectively.

Apart from the fine imposed, the NGT also quashed the environmental clearance and stayed the construction of the project till the time the developer obtains a fresh clearance.

Key highlights of the operative part of the judgment:
• Buffer zone for construction around lakes increased from 30 meters to 75 meters.
• Buffer zone around rajakaluves to be measured from the edge of the drain. The revised buffer zone is 50 meters, 35 meters and 25 meters for primary, secondary and tertiary drains respectively.
• Mantri has been directed to restore the 3 acre 10 hunts encroached lake bed area immediately to the authorities.
• SEIAA (State Environmental Impact Assessment Agency) has been directed to amend the environmental clearance of both the project proponents and all further constructions of these two projects shall be conducted under the monitoring of SEIAA.
• State of Karnataka has been directed to submit a proposal demarcating wetlands within 4 weeks to MoEF whereafter the same shall be notified.
• There is a combined direction to remove the muck/debris deposited in the rajakaluve within 4 weeks failing which LDA shall undertake the same and charges shall have to be paid by the two builders.
• SEIAA has also been directed to prepare a muck-disposal plan within 3 months.

On December 8, 2016, the Supreme Court heard the case challenging the NGT order on the buffer zone norms of lakes in Bengaluru. The builders’ counsel pressed for stay of NGT judgement submitting that the order should not be extended to the appellamts who had purchased lands and planned construction prior to the said judgement. Dr Singhvi, who appeared on behalf of the petitioners, opposed the stay applications submitting that NGT has passed general directions which are essential for sustainable development. The Supreme Court observed that since other appeals on the same questions are pending, there shall be no stay or modification of the NGT order. Appeals were admitted; petitioners accepted notice and sought time for filing objections.

Your ticket for the: Agara-Bellandur case