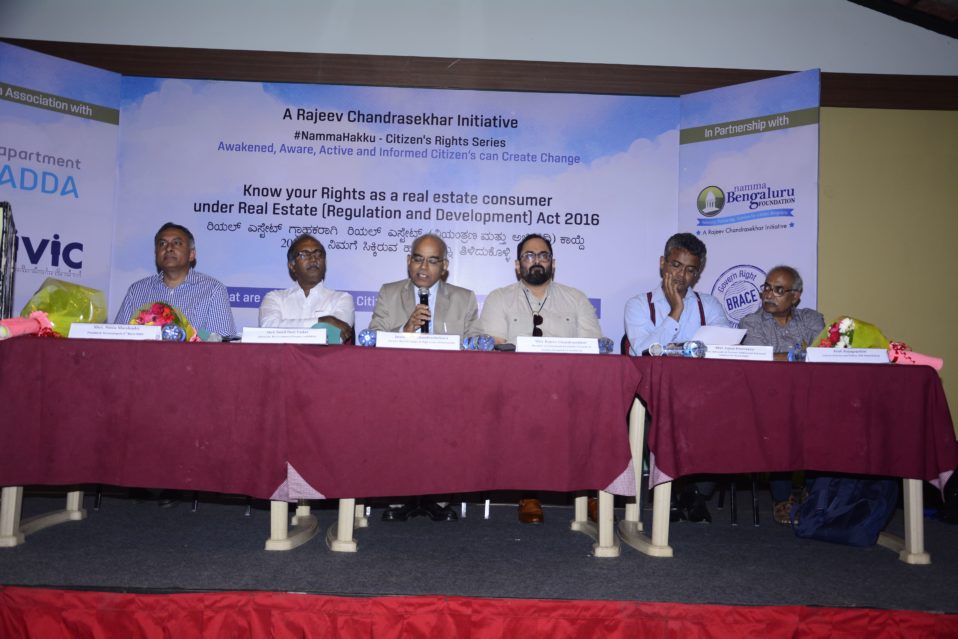 In the first of its kind initiative Namma Bengaluru Foundation in association with MP Shri Rajeev Chandrasekhar on June 16, 2016 organized a unique interactive citizen’s workshop, with an objective to awaken, inform and educate the citizens of Bangalore on the recently passed Real Estate Regulation Act (RERA). The focus of the workshop was to help consumers understand their rights against law breaking/fraudulent developer. After a lot of opposition, deliberation and several amendments, the Real Estate (Regulation and Development) Act, 2016 was approved by the Rajya Sabha on March 10, 2016.

The workshop is a part of #NammaHakku – Citizens’ Rights Series which is the brain child of Mr. Rajeev Chandrasekhar, MP Rajya Sabha ,who has long fought for the rights of citizens of Bengaluru. He has been the architect of RERA and has been instrumental in getting the act passed in Rajya Sabha.

Real Estate (Regulation and Development) Act, 2016 – What are your rights as a Home Buyer?

The Real Estate sector, which is a critical cog in India’s economic wheel, has experienced tremendous growth in recent years. The demand for residential and commercial properties, especially in the major cities, has been on the rise. A real estate transaction includes various complex elements such as financing, applicability of property laws, transfer of ownership etc., which most people fail to understand. For the common man, buying a property is likely to be the most crucial decision of their lives, and these intricate dealings that are mostly unregulated and disorderly leave most buyers flustered. It is a known fact that home buyers face unsympathetic practices of builders and hence the incumbent government’s move to approve the Real Estate (Regulatory and Development) Act, 2016 comes as a valuable trump card for purchasers.

Probably the most iconic pro-consumer legislation introduced, RERA promises to secure the interests of home buyers and expunge corruption and inefficiency from the real estate sector. The Act protects the interest of purchasers by promoting transparency and accountability in the construction and execution of real estate projects by developers. There are many benefits that consumers can look forward to – rights for home buyers, obligations for builders, penalties for violations and a separate Appellate Tribunal to resolve disputes on a fast track basis. RERA also ensures the consumer receives and takes delivery of the flat on time. If the builder does not do so the consumer is entitled to a full refund with interest if the delay is unduly long. The Act also requires the complete disclosure of the project details to prevent the misrepresentation by builders.

Listed below are key features of the Act, which not only renews investor confidence, but also brings about positive change in the boundless property market.

Your ticket for the: Namma Hakku – Citizens’ Rights Series